Last week fellow Freak team member Keegan and I decided to do a trip up to an undisclosed river in an undisclosed place. This place would have to be one of my favourite destinations I have ever fished as something insane always happens here.

We got to base camp at a local lure makers property, set up camp and shot down the creek for a late afternoon/night session. With the light fading we wanted to get to our chosen spot, so we paddled past some very enticing snags up a few rapids and into a large hole.

One side was dirt cliffs with a few undercuts and trees.  The other side was a sheer cliff with plenty of shade and hidey holes. This was my first session in the new Assassin GT fishing kayak and I already noticed the width compared to my last assassin. So much room for activities!

With the light fading, I noticed a swirl close to the cliff face and punched out a long cast with my popper. As soon as the popper landed there was another swirl right next to my lure. This turned out to be a Saratoga instantly turning and engulfing my lure on impact with the water. Before I knew what was happening I was on with the toga instantly taking to the air with some awesome jumps and me praying for the hooks to hold as this was the fourth toga I had hooked.

Thankfully they did hold and Keegan paddled over with his bigger net and netted the beautiful fish. After a few photos and a quick release, I was PUMPED that it was the first fish in the new yak, first on the new rod, first toga AND first fish of the trip. It was shaping up to be an awesome trip.

As the sun ducked behind the mountains Keegan dropped what we agreed was another toga and I landed a nice 44cm bass before we paddled home already thinking about what would happen in the morning.

I had a few flicks around our drop in point but got nothing, so we headed off upstream.
We paddle a few hundred meters until we got to a snag that Keegan has always hooked something from, and this time was no different. He pitched a nichos mauler surface walker to the very back of the snag where it was met with a boof, after only being in the water a few seconds. Unfortunately, his hooks failed to hold onto what we both called for a small cod judging by the take. We were heading up stream peppering snags when about half an hour later Keegan’s lure was met with the same fate, this time the hooks held and the line was being pulled off his reel straight back into the snag.

With the fish having him bricked he jumped into the water and managed to have a nice cod in the early 60’s on the mat. A few quick photos and the beautiful fish was released to fight another day.

We paddled on downstream and I managed a couple small bass when we came to an opening with a lot of mid-water snags. Keegan was commenting about these mid-water snags when he got it snagged on a small stick, tried to rip it off, and it pinged off with such speed the lure came back and belted him square in the forehead……!

After a lot of laughing and photos, I managed to gain composure and pulled the hooks out of Keegan’s head. Thank God it came out quite easily.

We paddled on down with both of us scoring fish at a fairly consistent rate on both TT jigspins matched with Zman minnowZ, streakZ curly tailZ and imakatsu Killer Bills.

I pitched my jig spin up under an overhanging tree and retrieved it through the shade and out into the sunlight then past a little stump in about a foot of water when a fish shot out and belted my lure in full sight….. It was what we were after – a sooty grunter. After a short but brutal fight, he was in the net and out for pictures.

Once we got out of the shallow run from where my sooty was pulled, we came into a nice hole where I was followed by a big bass and spotted a huge toga all within 30 seconds of each other. I then hear Keegan yell out “yeap I’m on … and I’m bricked” some fancy rod work (just pulling on the line as hard as possible) he got out a solid bass in the early 40’s

I changed to a bassman mumbler to get a little deeper as the sun was quite high by then. First cast nothing, second cast fish on as soon as it hit the water, third cast snagged in the deepest hole ever – ahh!

We came to a large fallen tree where Keegan was on one side and I was on the other. I hooked up on a good fish, and so did Keegan. Both our PB’s- mine the 5th 46cm bass for the season and Keegan’s 48cm matching last season’s PB.

As we neared our exit point I fired a cast into some shade where once again I was met with instant power. Hold on lock drag and he towed the yak close enough to do me in the snag, some rod work and yet another 46cm fish broke the surface 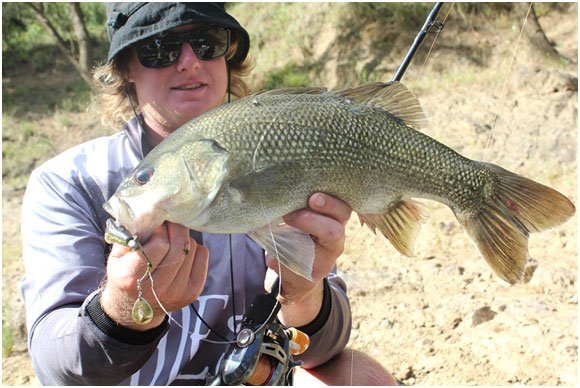 It was a good day with 1 cod, 1 sooty and around 25-30 bass landed between us on a variety of techniques. Back at camp by 6 pm dead tired and in need of a cold scotch and a good feed to contemplate the day just gone and plan for the morning…..