Quantum’s dominance of the American professional bass tournament scene is testament to the high level of innovation and research and development behind each of the reels. Aussie anglers are especially impressed with Quantum’s PT Saltwater Series. Quantum’s engineers utilised the start-of-the-art testing lab to create SaltGuard: it’s a six-layer finish that protects with a dense molecular barrier on the aluminium, followed by two separate corrosion inhibitors, primer paint, a base coat and finished with a clear coat for the ultimate protection in harsh saltwater environments. SaltGuard is standard on all Quantum PT Saltwater reels.

Other popular features in Quantum reels are the highest performing bearings in the industry, which were developed from technologies used in large turbine aircraft engines. The hybrid bearing design utilises nitrogen-injected stainless steel combined with special polymers that shield the bearings to reduce friction and noise. The stacked ceramic drag system is just as high-tech: it features a special ceramic coating on the discs to dissipate heat quicker and reduce drag fatigue when big fish strip line, which is when you need consistent performance the most! 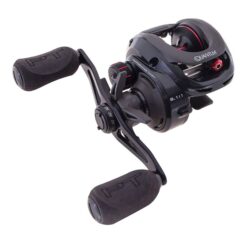