A little while back Keegan and I had a trip fall through and we were looking for an easy trip to make up for it and that’s when Nicho from “Nichos Maulers” homemade timber lures came through with the goods. He offered us a place to stay on his own property just minutes away from what is now one of my favourite places to fish.

From the first time, we visited Nicho we swore on our lives (literally) that we would never tell a soul where this place was. But after a few visits we gathered up the courage to ask if we could bring a friend along and to our surprise he said yes! We then told our mate Andy he was able to come and I don’t think I have ever seen someone so excited to chase bass from a yak for 13 hours straight!

The cars were loaded (thank God for soft roof racks) and off we went – Andy and I were there first then Keegs came after work. We all sorted our gear and headed off for a quick look at the water level and quality (and a sneaky arvo fish).

The water was high and flowing yet still very clean, which had me very excited. However, to my surprise that afternoon and into the night we only had 2 half hearted hits. This had me worried for tomorrow, knowing the trek we had in store would be very tough.

Our alarms went crazy at 3 am and we all managed to stagger out of our swags and drive down to the water. Andy and I started fishing before our Assassin GT’s were even in the water but Keegs was saving his first cast for a snag that he has ALWAYS produced at least a hook up from. Almost like a party trick he called his first cast and came up to a solid bass. This fish gave me a slight bit of relief after worrying about how well we were going to go all night! 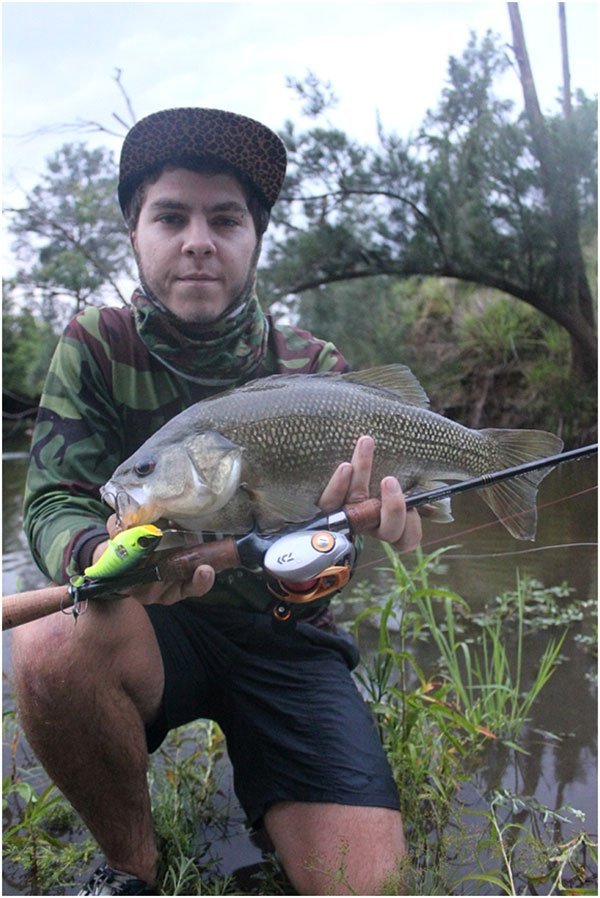 After going on to crack a few more fish, Andy still hadn’t hooked a fish; that was until he hooked a good fish in some deep fast water – and what a fish it was! His PB and first for the trip at 44cm. Not a massive fish but it had us all in amazement as it was a hatchey fish with a deformity and had us guessing how big it could have been if it had grown out properly!

Paddling on downstream we came to a hole where Andy, Keegs and I all caught a few good bass. We even had a triple hook up at one stage.

One of the basses just so happened to be my PB, coming in at 48 cm. It was a very skinny fish for its size but went like a train.

A few more fish came over the sides of our Freaks and I noticed Andy was lacking on the numbers side of things so I pointed out a prime looking spot – a deep back eddy with a fallen tree and a small alley way where he could make a cast and work the entire snag.

On the first cast, as soon as the lure hit the water he was on and pulled a nice bass from the very back of the snag.

As he let his fish go, I hooked up…. then Andy hooked up again from the exact same spot! This time his fish was 46 cm. Another new PB for him!

I started fishing a stretch of water where I have blown away last time with a 20lb. I paddled ahead of the boys to work the same snag hard, but got nothing so I decided to paddle down the head of a huge rapid and have a rest in the shade.

I was unable to resist the temptation of having a cast into an insane back eddy made from two huge trees in the middle of this rather large rapid. I shot my suspending jerkbait into the eddy and worked the lure aggressively until it was hard up against the fallen tree. I then had to try crank it in fast before the water pressure washed it under the tree and possibly have it snagged. 2 or 3 cranks of the handle at full speed and my lure was stopped dead in it tracks as a solid fish hit it. I instantly thought it was a sooty as the power this fish had in the fast water was insane but it bricked me right away.

Not thinking I jumped right in after it. Turned out the water was about neck deep right at the bank and the current was strong but I managed to get on top of the log, lay down, run my hand down the line and untangle my fish. Keegan then threw me his net from across the creek so I could land this solid bass. It was only 46 cm but it was solid and strong! This one fight will always be in my brain!

Finally arriving at our finish point just on dusk, dead tired, hungry and extremely sunburnt we fished “one last snag”, what just so happened to be about 40 meters long, but we managed 8 good bass all on top water. It was back to camp to figure out where we were going to go the next day, have a feed and a few drinks around the fire. Such an awesome way to end an awesome day.